Peter Neeves
5 minutes read
291 views
CentSai relies on reader support. When you buy from one of our valued partners, CentSai may earn an affiliate commission. Advertising Disclosure 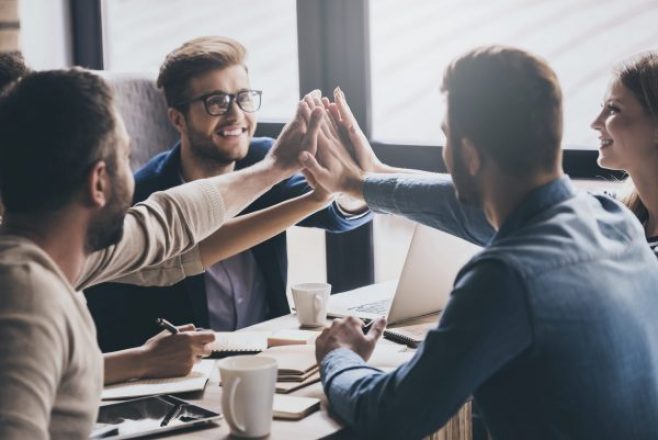 6 second take: Financial New Year's resolutions tend to fail by the end of the month, but building good financial habits can last a lifetime. 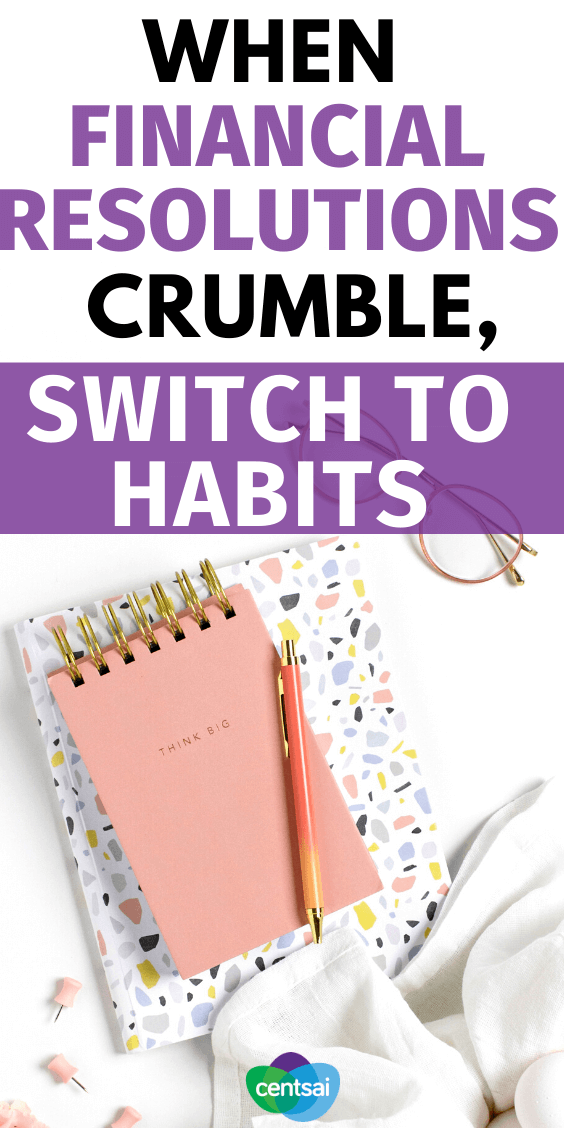 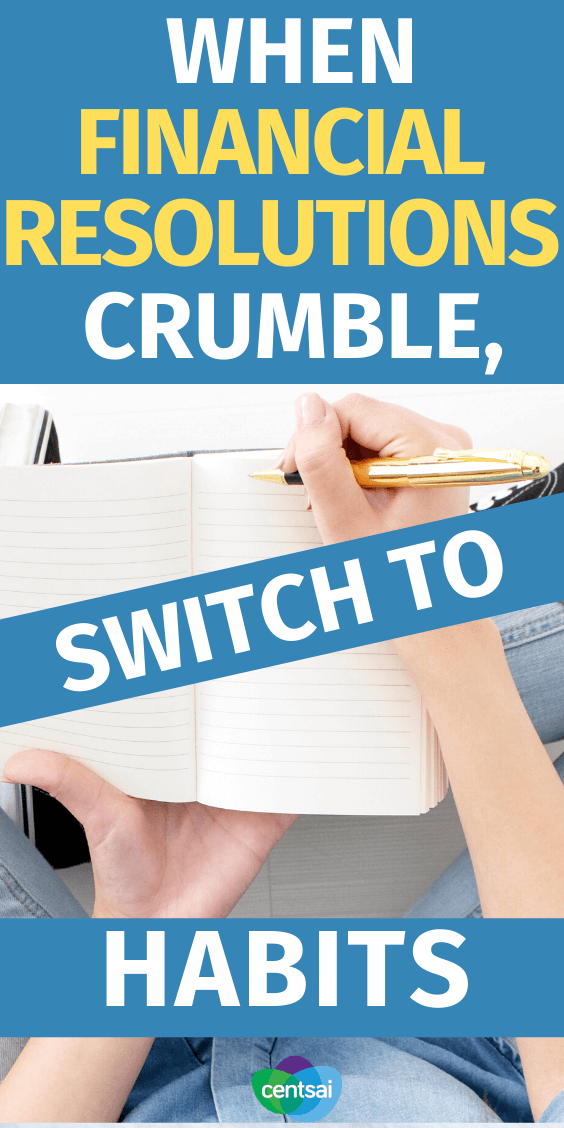 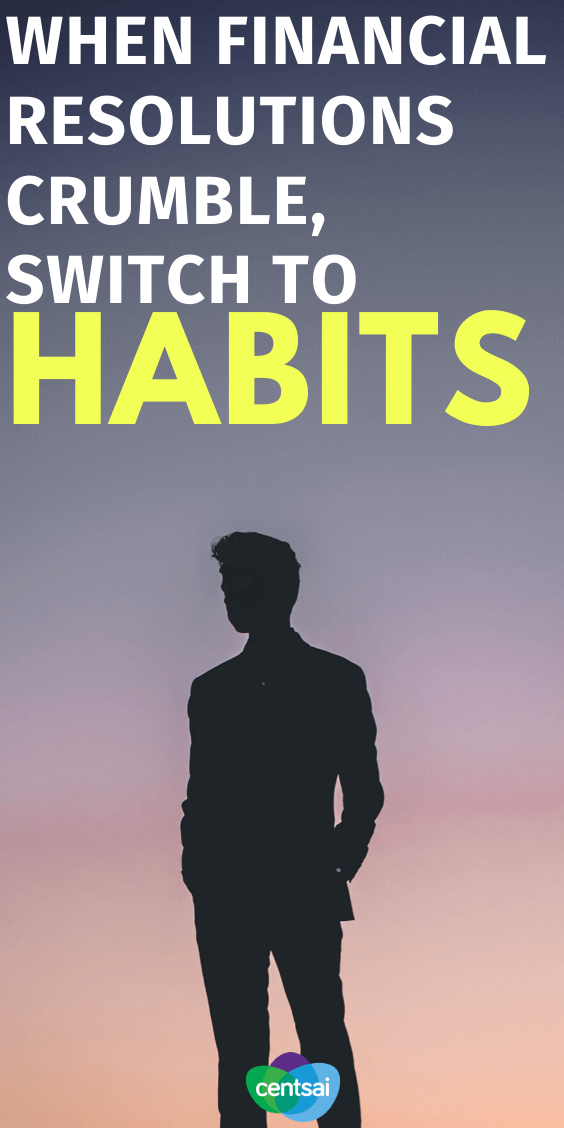 And this isn’t new. Resolutions keep failing. We keep making them. And believe they’ll work. But they don’t. Ninety percent of the time they don’t.

There are a couple of broad reasons for this. Often resolutions are based on an external motivation; it’s something we think we should do — or appear to be doing — or we’re doing it to please someone else.

External motivation is prone to failure when things get tough.

Another reason is excess scope. This means we’re biting off more than we can chew. If you’re in your 40s or 50s and you have nothing saved for retirement a resolution to “get on track for retirement” is bound to fail. It’s too big. It’s a couple-year project — if you’re dedicated. No one can blame you if you stare at that mountain for a couple of weeks and decide now’s not the time to climb it. Unrealistic goals kill motivation.

A Lack of Resolve

Then there’s the whole problem of resolve. If you have a large amount of resolve as part of your makeup, you probably don’t need to “resolve” to accomplish some new goals. You’re already on track for everything.

But if you lack in resolve, you may be on track for nothing. Then kicking in resolve — once the New Year comes around — seems like a great idea. You can picture it happening. Then the New Year gets here. And you find that resolve just isn’t you. You’re not into pulling yourself up by your bootstraps every day. You don’t want to live a life of struggle and difficulty to accomplish something that may be important but certainly doesn’t seem urgent. And the resolution drifts away. Again.

There’s got to be a better way.

If you’re one of the 10 percent who succeed with financial resolutions, great. Keep it up. For the rest of us, we need a better way — and that way is simply better habits.

The Path of Habit

A habit is nothing more than a behavior you continue to repeat as the result of having done so already. That sounds easy. And it doesn’t require resolve.

Let’s say I have a habit of spending $6 a day on a latte. Five days a week: $1,500 a year. If I’m on track for my goals and meeting all my obligations, this may be a reasonable choice for me. An acceptable habit.

But perhaps that isn’t the case. Perhaps I am that person with little or no retirement savings or some other shortfall in planning for my future or managing my finances. Then perhaps this is a bad habit. Let’s be kind to ourselves and call it a less-than-optimal habit. Let’s say this is what we want to change.

The resolution way would be to resolve to never do this again under any circumstances and put that money away every day. Then something happens and we break down. Perhaps we forget. Perhaps we’re having a rough day and really want the damn latte at any cost. That’s how resolutions end up in the dust bin.

Habits are kind and forgiving. We can have a bad day. Or forget. And it’s not the end of the world. We need to move toward where we want to go and who we want to be. But a mistake or a regression isn’t a deal breaker.

It may help to think absolutely; such as “I don’t do that anymore.” It helps us if we have pre-made a decision to change, rather than having to make a new decision every day. Takes the pressure off.

Habits become easy across time. That’s how — and why — they work. You get used to it. And it doesn’t have to be all-or-nothing. Perhaps you make a nice coffee at home to take with you. And it doesn’t cost six bucks.

The new habit can be anything you desire in support of your goal. It just needs to be manageable and repetitious. It can be to save a little more for retirement. To work a budget. To plan for your child’s future education. And you take small steps, one after the other. That’s how you climb mountains; one step, repeated many times. 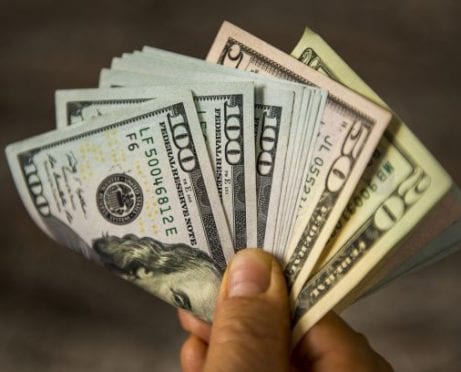 How to Avoid the Top 7 Investing Mistakes 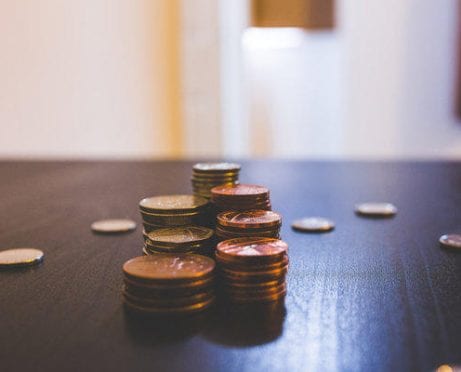 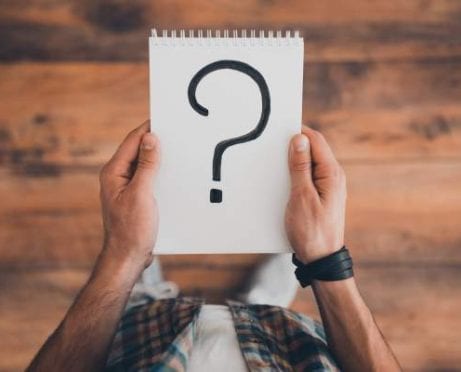