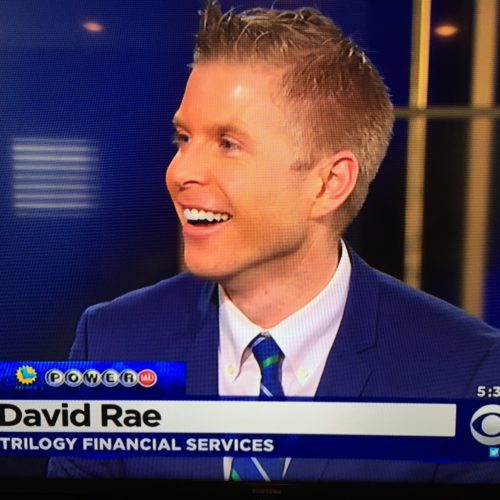 Your message to David Rae has been sent!Your request will be responded to shortly.

David Rae, CFP®, AIF®   David Rae, Certified Financial Planner®, Accredited Investment Fiduciary® and Wealth Manager of Trilogy Financial, positions his clients for prosperity.   “Once you get your financial house in order,” he says, “It’s a lot easier for everything else­–personal life, professional life, family life and recreational life–to fall into place too.”     Working with a wide diversity of clients for well over a decade, he has built a successful career developing comprehensive financial plans to meet life goals, retirement, tax planning, estate issues, portfolio revision, life insurance, portfolio management, business exit strategies and more. While based in Los Angeles, he serves clients across the country. At the same time, he enjoys a solid reputation as a smart, go-to financial guy for both mainstream and LGBT print, broadcast and online media.   Early days David grew up Irvine, California. His father Mike Rae retired from a career as an NFL quarterback (USC, Raiders, Redskins, Buccaneers) while he was still in elementary school. This gave him a front row seat to retirement planning and money manners early on. His mother, Terri, was something of a financial genius who ran a tight ship, planned carefully, got the most bang for the buck and successfully avoided the financial traps that often snare former athletes and their families.   At the University of Redlands, David majored in Business and Musical Theatre, earning full-ride scholarships in both disciplines. A year studying abroad in Vienna, Austria – in addition to consistent and considerable amounts of world travel that he keeps up to this day – engendered a dimensional world view about peoples and cultures.   Life in finance Financial planning has proven an excellent fit for fully engages David’s considerable math, social and communication skills. He began at Trilogy in 2003 as a Financial Advisor and hit the ground running. After completing the CFP’s rigorous two-year preparation program, in 2006 he passed the two-day CFP exam (the financial industry’s equivalent of the bar exam) with flying colors, earning him his professional certification. He achieved his Accredited Investment Fiduciary certification in 2015.   In addition to building his own business, David has always been active in helping others build their businesses as well. In 2004, he founded the Beverly Hills Breakfast Club chapter of BNI, an international networking group, which has grown today into the largest and wealthiest chapter in Southern California.   “There’s a significant lack of financial literacy in the general population,” David reports, “Even among those who are very bright. This may be related to being phobic about math since so much about money is really about math too. My function is to translate what may seem to be overwhelming and confusing concepts and programs into something clear, understandable and attainable. Essentially it’s pretty simple. You have a dream or life goal? Great, let’s sit down together, plan a workable strategy on how to finance it and make it a reality.”   Media matters David has been seen, quoted and published in many national publications including CBS News, Fox News, KTLA News, MSN Money, Men’s Health, NBC News, The Today Show, US News & World Report, Yahoo News and 401(K) Specialist Magazine. He blogs weekly on financial issues for The Huffington Post where he is noted for his trenchant observations and spot-on wit. He is also a regular contributor to The Advocate Magazine and Investopedia blogs.   Personal life David has completed the 545 mile Aids Lifecycle bicycle ride from San Francisco to Los Angeles for seven years in a row becoming not only a top fundraiser personally but heading a team that raised over a million dollars for the organization. A longtime and enthusiastic resident of West Hollywood, he lives with his husband Ryne Meadors and their two chihuahuas.   For more by David Rae check out his blog Financial Planner LA     -David Rae, CFP®, AIF®   Wealth Manager, Trilogy Financial 949-852-7818   david.rae@trilogyfs.com